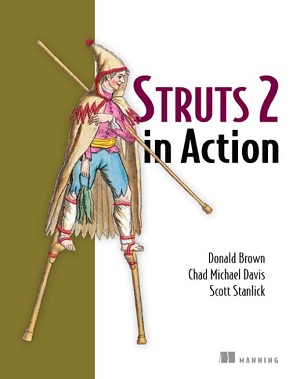 The original Struts project revolutionized Java web development and its rapid adoption resulted in the thousands of Struts-based applications deployed worldwide. Keeping pace with new ideas and trends, Apache Struts 2 has emerged as the product of a merger between the Apache Struts and OpenSymphony WebWork projects, united in their goal to develop an easy-to-use yet feature-rich framework. Struts 2 represents a revolution in design and ease of use when compared to classic Struts. It adds exciting and powerful features such as a plugin framework, JavaServer Faces integration, and XML-free configuration.

Struts 2 In Action introduces the Apache Struts 2 web application framework and shows you how to quickly develop professional, production-ready modern web applications. Written by Don Brown, one of the leading developers of Struts 2, Chad Davis, a passionate Struts 2 developer, along with Scott Stanlick, this book gently walks you through the key features of Struts 2 in example-driven, easy-to-digest sections.

Struts 2 in Action delivers accurate, seasoned information that can immediately be put to work. This book is designed for working Java web developers—especially those with some background in Struts 1 or WebWork. The core content, covering key framework components such as Actions, Results, and Interceptors, includes new features like the annotation-based configuration options. You’ll find chapters on Struts 2 plugins, FreeMarker, and migration from Struts 1 and WebWork 2. Finally, new topics such as the Ajax tags, Spring Framework integration, and configuration by convention give familiar subjects new depth.