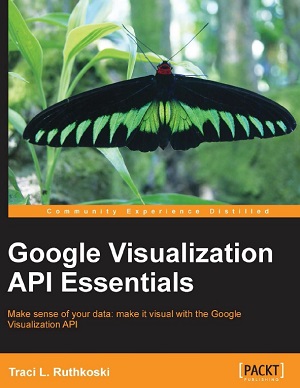 There’s a lot of data in our world, and visual representations are often the best method of making sense of it all. Yet, it should not take an army of programmers and analysts to create visualizations in order to make data useful. The Google Visualization API is accessible to novice and advanced programmers alike, making data useful to more people.

“Google Visualization API Essentials” will show you how to create interactive data displays with very little code. The API, combined with Google Spreadsheets and Fusion Tables, is a complete system, from data management to analytical displays. Not only is it simple to learn, but the Google Visualization API can also be viewed as a first step to learning additional Google APIs.