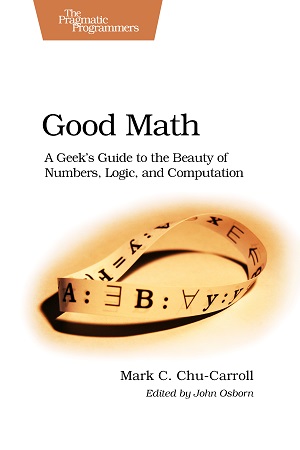 Why do Roman numerals persist? How do we know that some infinities are larger than others? And how can we know for certain a program will ever finish? In this fast-paced tour of modern and not-so-modern math, computer scientist Mark Chu-Carroll explores some of the greatest breakthroughs and disappointments of more than two thousand years of mathematical thought. There is joy and beauty in mathematics, and in more than two dozen essays drawn from his popular “Good Math” blog, you’ll find concepts, proofs, and examples that are often surprising, counterintuitive, or just plain weird.

Mark begins his journey with the basics of numbers, with an entertaining trip through the integers and the natural, rational, irrational, and transcendental numbers. The voyage continues with a look at some of the oddest numbers in mathematics, including zero, the golden ratio, imaginary numbers, Roman numerals, and Egyptian and continuing fractions. After a deep dive into modern logic, including an introduction to linear logic and the logic-savvy Prolog language, the trip concludes with a tour of modern set theory and the advances and paradoxes of modern mechanical computing.

If your high school or college math courses left you grasping for the inner meaning behind the numbers, Mark’s book will both entertain and enlighten you.