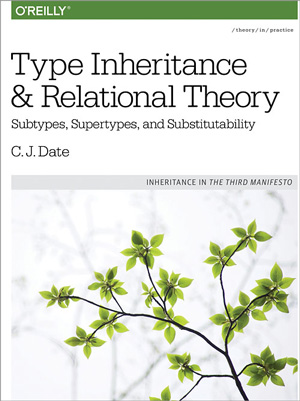 Type inheritance is that phenomenon according to which we can say, for example, that every square is also a rectangle, and so properties that apply to rectangles in general apply to squares in particular. In other words, squares are a subtype of rectangles, and rectangles are a supertype of squares. Recognizing and acting upon such subtype / supertype relationships provides numerous benefits: Certainly it can help in data modeling, and it can also provide for code reuse in applications. For these reasons, many languages, including the standard database language SQL, have long supported such relationships. However, there doesn’t seem to be any consensus in the community at large on a formal, rigorous, and abstract model of inheritance. This book proposes such a model, one that enjoys several advantages over other approaches, not the least of which it is that it’s fully compatible with the well known relational model of data.

Topics the model covers include:

All of these topics are described in detail in the book, with numerous illustrative examples, exercises, and answers. The book also discusses several alternative approaches. In particular, it includes a detailed discussion and analysis of inheritance as supported in the SQL standard.

Introduction to Machine Learning with Python