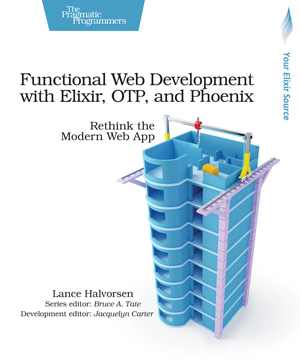 Elixir and OTP provide exceptional tools to build rock-solid back-end applications that scale. In this book, you’ll build a web application in a radically different way, with a back end that holds application state. You’ll use persistent Phoenix Channel connections instead of HTTP’s request-response, and create the full application in distinct, decoupled layers.

In Part 1, start by building the business logic as a separate application, without Phoenix. Model the application domain with Elixir functions and simple data structures. By keeping state in memory instead of a database, you can reduce latency and simplify your code. In Part 2, add in the GenServer Behaviour to make managing in-memory state a breeze. Create a supervision tree to boost fault tolerance while separating error handling from business logic.

Phoenix is a modern web framework you can layer on top of business logic while keeping the two completely decoupled. In Part 3, you’ll do exactly that as you build a web interface with Phoenix. Bring in the application from Part 2 as a dependency to a new Phoenix project. Then use ultra-scalable Phoenix Channels to establish persistent connections between the stateful server and a stateful front-end client.

You’re going to love this way of building web apps!