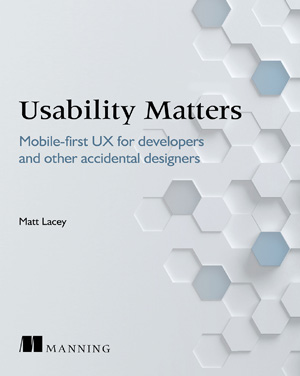 Just because a mobile app works doesn’t mean real people are going to like it. Usability matters! Most mobile developers wind up being part-time designers, and mastering a few core principles of mobile UI can make the difference between app and crap.

Usability Matters is a guide for developers wrestling with the subtle art of mobile design. With each expertly presented example, app developer and designer Matt Lacey provides easy-to-implement techniques that instantly boost your design IQ. Skipping highbrow design theory, he addresses topics like gracefully handling network dropouts and creating intuitive data inputs. Read this book and your apps will look better, your users will be happier, and you might even get some high-fives at the next design review.

This book is for mobile developers working on native or web-based apps.

Matt Lacey is an independent mobile developer and consultant and a Microsoft MVP. He’s built, advised on, and contributed to apps for social networks, film and TV broadcasters, travel companies, banks and financial institutions, sports companies, news organizations, music-streaming services, device manufacturers, and electronics retailers. These apps have an installed base of more than 500,000,000 users and are used every day around the world.

Matt previously worked at a broad range of companies, doing many types of development. He has worked at startups, small ISVs, national enterprises, and global consultancies, and written software for servers, desktops, devices, and industrial hardware in more languages than he can remember. He lives in the UK with his wife and two children.