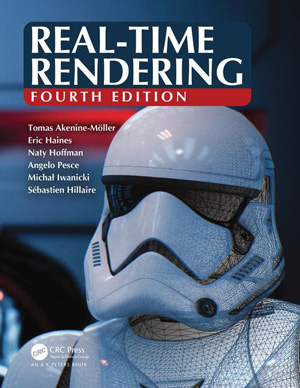 Thoroughly updated, this fourth edition focuses on modern techniques used to generate synthetic three-dimensional images in a fraction of a second. With the advent of programmable shaders, a wide variety of new algorithms have arisen and evolved over the past few years. This edition discusses current, practical rendering methods used in games and other applications. It also presents a solid theoretical framework and relevant mathematics for the field of interactive computer graphics, all in an approachable style. New to this edition: new chapter on VR and AR as well as expanded coverage of Visual Appearance, Advanced Shading, Global Illumination, and Curves and Curved Surfaces.

Naty Hoffman is currently Principal Engineer & Architect at Lucasfilm’s Advanced Development Group. Previously he was Vice President of Technology at 2K. Prior to that he was employed at Activision (working on graphics R&D for various titles, including the Call of Duty series), SCEA Santa Monica Studio (coding graphics technology for God of War III), Naughty Dog (developing PS3 first-party libraries), Westwood Studios (leading graphics development on Earth and Beyond) and Intel (driving Pentium pipeline modifications and assisting the SSE / SSE2 instruction set definition).

Angelo Pesce currently serves as a Technical Director for Activision Central Technology where he helps the Call of Duty studios with rendering R&D. His interest in Computer Graphics started in his teens by joining the demoscene community. In the past he has worked on rendering solutions for companies such as Milestone, Electronic Arts, Capcom and Relic Entertainment.

Sebastien Hillaire is a senior rendering engineer pushing visual quality, performance and workflows within the Frostbite team at Electronic Arts. He obtained his PhD in Computer Science from the French National Institute of Applied Science in 2010, during which he focused on using gaze tracking to enhance virtual reality user experiences.

Michal Iwanicki currently works as a Technical Director in Activision Central Technology group, where he focuses on graphics related research. He worked on rendering and engine code for games in The Witcher, The Last of Us, and the Call of Duty series

Automate the Boring Stuff with Python

Java in a Nutshell, 7th Edition