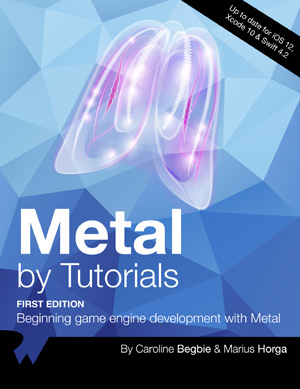 This book will introduce you to graphics programming in Metal — Apple’s framework for programming on the GPU.

Build your own low-level game engine in Metal!

But beyond the technical definition, Metal is the most appropriate way to use the GPU’s parallel processing power to visualize data or solve numerical challenges. It’s also tailored to be used for machine learning, image/video processing or, as this book describes, graphics rendering.

This book will introduce you to low-level graphics programming in Metal — Apple’s framework for programming on the graphics processing unit (GPU). As you progress through this book, you’ll learn many of the fundamentals that go into making a game engine and gradually put together your own engine. Once your game engine is complete, you’ll be able to put together 3D scenes and program your own simple 3D games. Because you’ll have built your 3D game engine from scratch, you’ll be able to customize every aspect of what you see on your screen.

This book is for intermediate Swift developers interested in learning 3D graphics or gaining a deeper understanding of how game engines work.