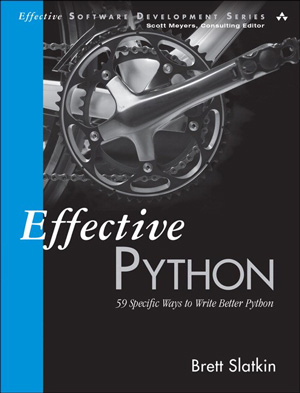 The Python programming language has unique strengths and charms that can be hard to grasp. Many programmers familiar with other languages often approach Python from a limited mindset instead of embracing its full expressivity. Some programmers go too far in the other direction, overusing Python features that can cause big problems later.

Effective Python provides insight into the Pythonic way of writing programs: the best way to use Python. It builds on a fundamental understanding of the language that I assume you already have. Novice programmers will learn the best practices of Python’s capabilities. Experienced programmers will learn how to embrace the strangeness of a new tool with confidence.

My goal is to prepare you to make a big impact with Python.

What This Book Covers

Each chapter in Effective Python contains a broad but related set of items. You should jump between items and follow your interest. Each item contains concise and specific guidance explaining how you can write Python programs more effectively. Items include advice on what to do, what to avoid, how to strike the right balance, and why this is the best choice.

The items in this book are for Python 3 and Python 2 programmers alike. Programmers using alternative runtimes like Jython, IronPython, or PyPy should also find the majority of items to be applicable.

Brett Slatkin is a principal software engineer at Google. He is the technical co-founder of Google Surveys, the co-creator of the PubSubHubbub protocol, and he launched Google’s first cloud computing product (App Engine). Fourteen years ago, he cut his teeth using Python to manage Google’s enormous fleet of servers.

Deep Learning for the Life Sciences