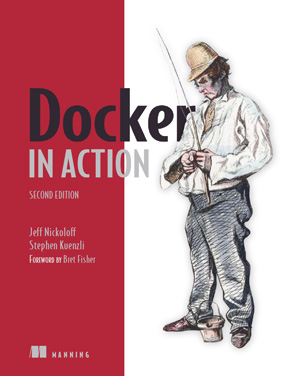 Docker in Action, Second Edition teaches you the skills and knowledge you need to create, deploy, and manage applications hosted in Docker containers. This bestseller has been fully updated with new examples, best practices, and a number of entirely new chapters.

The idea behind Docker is simple—package just your application and its dependencies into a lightweight, isolated virtual environment called a container. Applications running inside containers are easy to install, manage, and remove. This simple idea is used in everything from creating safe, portable development environments to streamlining deployment and scaling for microservices. In short, Docker is everywhere.

Docker in Action, Second Edition teaches you to create, deploy, and manage applications hosted in Docker containers running on Linux. Fully updated, with four new chapters and revised best practices and examples, this second edition begins with a clear explanation of the Docker model. Then, you go hands-on with packaging applications, testing, installing, running programs securely, and deploying them across a cluster of hosts. With examples showing how Docker benefits the whole dev lifecycle, you’ll discover techniques for everything from dev-and-test machines to full-scale cloud deployments.

Written for developers with experience working with Linux.