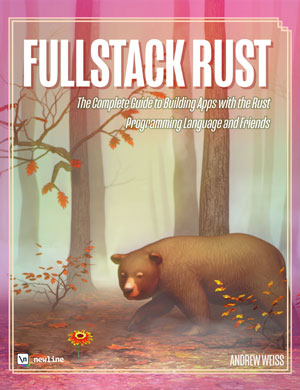 The Rust language is a way to write incredibly fast – and safe – code. It’s being used to build tools at Google, Facebook, Amazon, and many other companies where performance is critical.

While there are some good resources on how to learn the Rust programming language by itself, what these other books don’t teach is how to build applications with Rust.

Fullstack Rust solves that. In this book we show you how to use Rust to build incredibly fast web-servers, build command-line tools, and compile apps to run in the browser with Web Assembly (WASM).

Learn the techniques and tools to build realistic Rust applications

Rust has features that make it a fantastic tool for a number of tasks. Some highlights include:

Rust has a great set of documentation around the standard library. However, this book has a different focus – instead of trying to teach you just the Rust language, our goal is to build realistic applications and explore some of the techniques and tools available in Rust for accomplishing those tasks.

In the process of working through some common scenarios, you will also be able to learn Rust.

In the book, we teach with a gradual ramp-up from very simple to more complex programs as we build up our Rust toolbelt. Along the way, we’ll show places where many people stumble and support you in finding your own way over these hurdles.

By the time you’re done with this book, you’ll be empowered to branch out and build your own Rust programs.