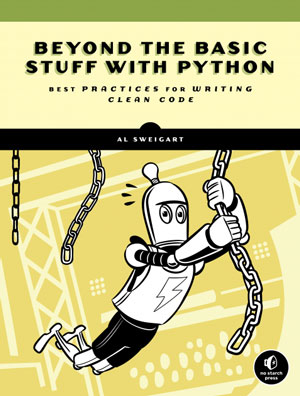 Welcome to Beyond the Basic Stuff with Python. More than a mere collection of advanced syntax and masterful tips for writing clean code, you’ll learn how to advance your Python programming skills by using the command line and other professional tools like code formatters, type checkers, linters, and version control. Sweigart takes you through best practices for setting up your development environment, naming variables, and improving readability, then tackles documentation, organization and performance measurement, as well as object-oriented design and the Big-O algorithm analysis commonly used in coding interviews. The skills you learn will boost your ability to program—not just in Python but in any language.

Toward the end of the book you’ll read a detailed source-code breakdown of two classic command-line games, the Tower of Hanoi (a logic puzzle) and Four-in-a-Row (a two-player tile-dropping game), and a breakdown of how their code follows the book’s best practices. You’ll test your skills by implementing the program yourself.

Of course, no single book can make you a professional software developer. But Beyond the Basic Stuff with Python will get you further down that path and make you a better programmer in the process as you learn to write readable code that’s easy to debug and perfectly Pythonic.

Al Sweigart is a celebrated software developer, creator of a wildly popular Udemy Python course, and a programming teacher. A fellow at the Python Software Foundation, Sweigart is also the author of three other Python books with No Starch Press, including the worldwide bestseller Automate the Boring Stuff with Python.