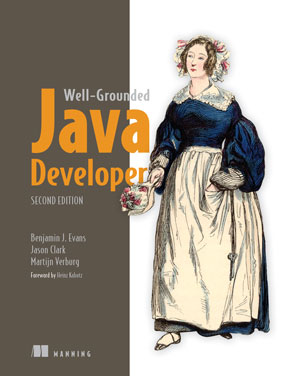 Understanding Java from the JVM up gives you a solid foundation to grow your expertise and take on advanced techniques for performance, concurrency, containerization, and more.

In The Well-Grounded Java Developer, Second Edition you will learn:

The Well-Grounded Java Developer, Second Edition introduces both the modern innovations and timeless fundamentals you need to know to become a Java master. Authors Ben Evans, Martijn Verburg, and Jason Clark distill their decades of experience as Java Champions, veteran developers, and key contributors to the Java ecosystem into this clear and practical guide. You’ll discover how Java works under the hood and learn design secrets from Java’s long history. Each concept is illustrated with hands-on examples, including a fully modularized application/library and creating your own multithreaded application.

Java is the beating heart of enterprise software engineering. Developers who really know Java can expect easy job hunting and interesting work. Written by experts with years of boots-on-the-ground experience, this book upgrades your Java skills. It dives into powerful features like modules and concurrency models and even reveals some of Java’s deep secrets.

With The Well-Grounded Java Developer, Second Edition you will go beyond feature descriptions and learn how Java operates at the bytecode level. Master high-value techniques for concurrency and performance optimization, along with must-know practices for build, test, and deployment. You’ll even look at alternate JVM languages like Kotlin and Clojure. Digest this book and stand out from the pack.

The Art of Functional Programming