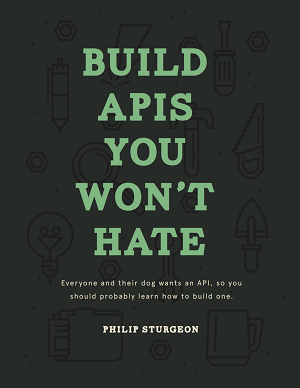 API development is becoming increasingly common for server-side developers thanks to the rise of front-end JavaScript frameworks, iPhone applications, and API-centric architectures. It might seem like grabbing stuff from a data source and shoving it out as JSON would be easy, but surviving changes in business logic, database schema updates, new features, or deprecated endpoints can be a nightmare.

After finding many of the existing resources for API development to be lacking, Phil learned a lot of things the hard way through years of trial and error. This book aims to condense that experience, taking examples and explanations further than the trivial apples and pears nonsense tutorials often provide.

Phil worked primarily as an API developer for the last three years. One horror was managing an API built in FuelPHP by a freelancer at the million dollar startup he joined. It was utilizing a then deprecated ORM which had been hacked to death by the previous developer, so took the time to delete that mess and build the next version in Laravel, leveraging it’s simple routing, database migrations, schema, seeding, etc. When the following major version of the API was built no rewrite was required, and both managed to live side-by-side on the same “API” servers.

By passing on some best practices and general good advice you can hit the ground running with API development, combined with some horror stories and how they were overcome/avoided/averted. This book will discuss the theory of designing and building APIs in any language or framework, with this theory applied in PHP-based examples.

Some of the more advanced topics covered here are endpoint testing, embedding data objects in a consistent and scalable manner, paginating responses (including embedded objects) and hypermedia “HATEOAS” controls.