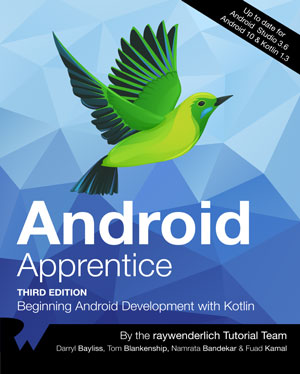 Android Apprentice is our book for complete beginners to Android development.

For Complete Beginners to Android!

If you’re completely new to Android or developing in Kotlin, this is the book for you.

Android Apprentice takes you all the way from building your first app, to submitting your app for sale. By the end of this book, you’ll be experienced enough to turn your vague ideas into real apps that you can release on the Google Play Store.

You’ll build 4 complete apps from scratch — each app is a little more complicated than the previous one. Together, these apps will teach you how to work with the most common controls and APIs used by Android developers around the world.

And these aren’t simple apps, either; you’ll build everything from a simple game, to a checklist app, a map-based app, and a podcast manager and player!

We’ve also included some bonus sections on handling the Android fragmentation problem, how to keep your app up-to-date, preparing your app for release, testing your app, and publishing it for the world to enjoy!

If you’re new to Android programming, you need a guide that:

We’ve written this book in Kotlin: the new, modern, first-class language for Android developers. You’ll be at the leading edge of Android developers everywhere as you learn how to develop in the fluid and expressive Kotlin language.

The Android Apprentice is your best companion for learning Android development. With all project source code included with the book, and support forums right on our site, it’s simply the best way to start your Android development career.